Throughout the City of Waterloo there are monu­ments, plaques and installations that pay homage to the citizens and industry that helped make Waterloo what it is today. One of these is the replica of Abra­ham Erb’s Grist Mill, which was constructed in 1997 as a tribute to the City’s first industry. Erb was an early Mennonite immigrant and farmer who con­structed a primitive saw mill that would later re-open as a grist mill in 1816. The mill was originally located on King Street, north of Waterloo Public Square, and was large enough to accommodate the many farm­ers who travelled over great distances with grain and livestock. Its 18-foot mill wheel was powered by Beaver Creek (now Laurel Creek, which travels from Silver Lake under the Waterloo Public Square and emerges north of the City Hall on Regina Street). Erb’s mill played a pivotal role in the settlement of the Village of Waterloo by serving as a destination for business and social interaction. While waiting for grist (grain that has been separated from its chaff or ground against a mill) farmers and their family mem­bers would lounge in the basement of the mill where they could be warmed by a large fireplace, meet new friends, and trade with other farmers. Jacob C. Snider took ownership of the mill in 1829, and four successive generations of the Snider family operated it into the late 1920s, at which point the majority of the foundations were blasted and re­moved from the site. One histori­cal account claims that portions of the foundation and old fireplace still exist today, buried by years of backfilling. 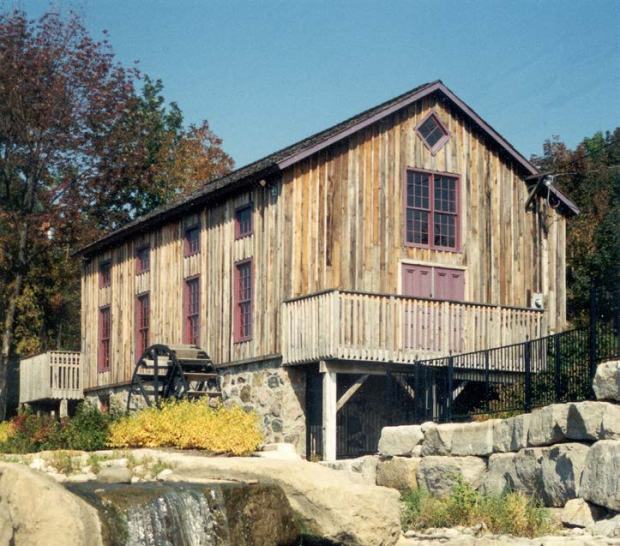 The replica grist mill on Caroline Street as it appears today

Bringing the past into the present, the replica of the Abraham Erb Grist Mill is located only a few blocks away from its original King Street foundation, on the bank of Silver Lake on Caroline Street North. The building incorporates a long list of historical materials ranging from 1840s hand hewn elm, cherry, and maple woods, to field stones recovered from vari­ous barn foundations of the same era, and handmade tables salvaged from historic basswood. These ma­terials, donated by local companies and individuals, were valued to be around $50,000. The mill now serves as a popular site for wed­dings, events, photography, and a meeting location to commence guided tours.

Tags: Abraham Erb, Grist mill
From: Building Spotlight, Landmarks
← Stories from the MacGregor/Albert Heritage Conservation District: Emmanuel United Church
160 Years of Change at the Corner of King and Erb →
No comments yet