The Hidden Gems of Waterloo: Our Residential Architecture

The City of Waterloo Museum’s current exhibit, At Home: Residential Architecture in Waterloo, highlights the neighbourhoods and architectural styles that are found in our city. Featured styles include Victory housing, Edwardian, Colonial Revival and Mid-Century Modern. Visitors to the Museum can interact with “please touch” materials that have been used in the construction of residential dwellings over time.

On September 21, Jinni Hartmann (Specialist, Museum & Archives Collections) and Warren Stauch (local historian and preeminent Tour Guide) hosted an architectural bus tour that complemented the At Home exhibit. The informative tour took visitors to neighbourhoods across Waterloo such as Colonial Acres, Veterans’ Green, Lincoln Heights and Willowdale, and even briefly included Kitchener! To learn more about these and other neighbourhoods, and about the architecture of Waterloo, keep reading.

A simple version of Edwardian classicism became one of the most popular residential architectural styles in Ontario in the early twentieth century. The dwellings are typically symmetrical and square with a hipped roof or front gable, centred dormer, tall balanced chimneys and a projecting frontispiece. They often feature large front porches with classically-inspired columns that run the length of the façade, generous windows and are set back from the street. This architectural style can be found throughout Waterloo.

Victory housing on Fir Street. Provided by the City of Waterloo Museum.

Victory housing dates to the Second World War, when the Canadian government began to supply housing for those working in defense-oriented industries, and later to returning war veterans. In September 1946, the Town of Waterloo and Housing Enterprises Canada Ltd. announced one of the first housing projects in Ontario for returning veterans: Veterans’ Green, located between Dearborn (now University Avenue) and Hill (now Hickory) Streets. 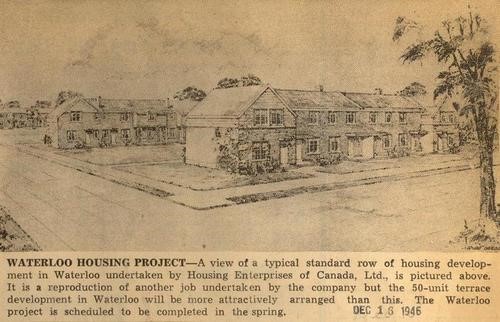 The dwellings are typically one-and-a-half storeys with a steep roof, shallow eaves, multi-paned sash windows and no dormers, and most elements were prefabricated at a central factory and shipped for assembly at the final location. Clapboard was the most common siding for Victory houses. 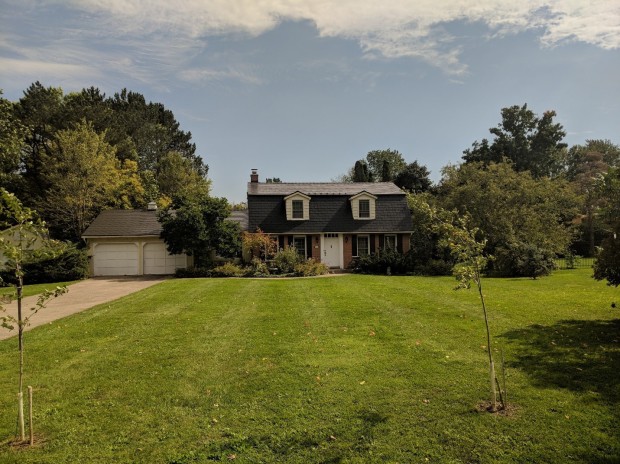 A Colonial Revival dwelling in the Colonial Acres neighbourhood.

Architectural designer Charlie Voelker, whose career spanned from the post-war period to his death in 1986, is associated with designing many of the Colonial Revival-style homes in the neighbourhoods of Colonial Acres, Westmount and Beechwood. Colonial Revival dwellings typically use modern materials and construction methods (for example, snap-on window glazing bars) and have attached garages. Other common elements include porch details such as Tuscan columns, simple eave cornices, pediments, dormers and plainly treated windows. If of the Dutch colonial style, the dwelling’s defining feature will be a gambrel roof.

Marr House, an example of a mid-century modern dwelling at 222 Stanley Drive.

Mid-century modern dwellings were designed to consciously shift away from historic architectural styles. They featured modern conveniences of the post-war era, such as refrigerators, electric ovens and continuous counter tops. Typical features of this style include reinforced concrete forms (a building’s basic form is shaped by its plan and roof shape); a sloping roof and carport; mass-produced building materials; smooth surfaces of chrome, glass and vitrolite (panels of clear glass with colour glass laminated to one side); large picture windows; and simple door and window designs.

What are some of your favourite architectural styles and residential dwellings in Waterloo?

Westmount: The Tie That Binds the Twin Cities by Susan Saunders Mavor

From: Architecture
← Beer, bathtubs and bricks: how craft beer lived, died and was eventually reborn in uptown Waterloo
What makes up the Waterloo Vernacular residential architectural style? →