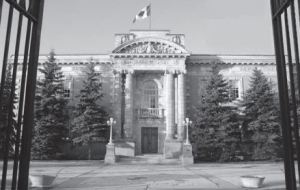 “Gentlemen, we will never fill it!” proclaimed General Manager George Wegenast back in 1912, upon entering the newly built Mutual Life Assurance Company of Canada building (now Sun Life Financial) at the corner of King and Union Streets.

Perhaps a better manager than fortune teller, Wegenast’s declaration proved wrong only nine years later when the company’s growth required a large addition to be built along Union Street. Other expansions followed in steady succession.

Originally situated on 6.79 acres purchased in 1908 from Caroline Randall for a sum of $18,000, the 1912 structure (facing King St.) was designed in a Modern Renaissance style by architect Frank Darling of the acclaimed Toronto architecture firm, Darling & Pearson. Darling & Pearson played an important role around the turn of the century in shaping the urban fabric of not only Southern Ontario cities but many other urban centres across Canada as well. Their designs of grand commercial and public buildings included the Royal Ontario Museum (1914), the College wing of the Toronto General Hospital (1911) and numerous University of Toronto buildings, such as Convocation Hall (1906).

The Sun Life Building, like many commercial buildings of the 19th and early 20th century, is designed in a revival style: that is, it borrows from the architectural styles of a previous era. Using style elements of the Renaissance period, such as balance and the use of simple geometric shapes, the King Street façade is dominated by two pairs of massive columns and a Romanesque tympanum —a dome intricately decorated with foliage and a central shield.

Guelph historian Laura Waldie reports in her blog the incorporation of the letter “M” into a number of exterior and interior features of the building, which pays homage to the company’s original name, Mutual Life. Just inside the large oak front doors is the Great Hall, distinguished not only by the use of richly coloured marble for the walls, floor and baseboards, but also by the intricate plaster mold detailing on the ceiling which surrounds an immense skylight of frosted glass. The domed skylight was originally built using clear glass, but this proved to have a greenhouse effect on the workers below and by 1915, the company resorted to using a canvas cover over the skylight in the summer to help moderate the room’s temperature

To celebrate the 100th anniversary of the building, Sun Life Financial embarked on a significant, multi-year restoration project, to clean the masonry, recast the balustrades, repair the courtyard and gate columns, and rebuild the cornice using lead coated copper. A landscape architect has been retained to design a sympathetic new landscape plan for the building.