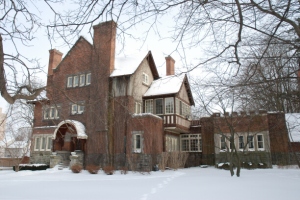 In the fall of 1913, construction began on an English manor house with Germanic Victorian design, located at 31 Union Street East in Waterloo. The residence, designed by the prolific and acclaimed Toronto architect, Eden Smith, was a wedding gift from Joseph E. Seagram, founder of Seagram and Sons Distiller, to the youngest of his four sons, Thomas W. Seagram.

Situated on 1.5 acres, the house comprised 8,193 square feet and 2 ½ storeys of red brick. The initial cost of the building was approximately $9,000.00 (more than 3 times the cost of the average stone or brick residence at the time). Despite the ample square footage, Thomas and his wife, Dorothy Pearson, had only two children, Stephanie and Thomas. A total of 17 rooms, 10 fireplaces and two staircases accommodated the small family and domestic help more than adequately. 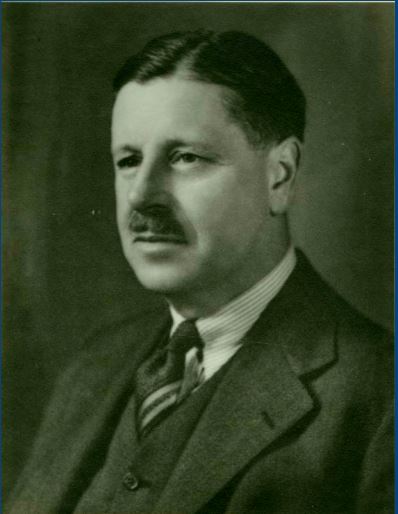 The double and triple bricked home (ivy covered in later years) was situated on an “L” shaped, wooded lot, fronting both Herbert and Union Streets. Black walnut and other indigenous tree species along with spacious lawns framed the home. Behind and separated from the house was a single storey, flat roof garage with parapets designed to match the main house. While it was only a two door garage, one door was large enough to accommodate two vehicles.

The interior of the home was sufficiently grand to capture the attention of the magazine Canadian Homes and Gardens in 1927. The magazine showcased the house in a multi-page spread, providing a charming description of the den as “a man’s room with its books, mementos and comfortable furniture is Mr. Seagram’s own snuggery” and a lavish (by today’s standards) sitting room as an “ideal room for bridge” (Source courtesy of Special Collections, University of Waterloo). Other rooms included a formal living room, dining room, an extra large high-ceilinged kitchen with its own butler’s kitchen, a games room that housed a formidable billiard table, a sun room, and numerous bedrooms and bathrooms. The basement housed two laundry rooms, a cold cellar, a boiler room, storage rooms and two security safes, one of which was a walk-in.

The Billiard Room of the Seagram-Bauer House, 2008
Photograph by the City of Waterloo Municipal Heritage Committee

This beautifully appointed home was owned by the Seagram’s until 1965, when it was purchased by Raymond Bauer of Bauer Industries. The Bauer family lived in the house until 2007. In 2009, the property was purchased by Sorbara, Schumacher, McCann LLP. The historic home has been meticulously refurbished, maintaining as many as possible of the original elements, including the games room, lounge area, study and board room.