Nearly 15 years ago, two Seagram whisky barrel warehouses were converted into residential lofts, turning what was once a barrel storage facility into a home for over 100 people.

As one of Waterloo’s first major adaptive re-use projects, the story of these two former Seagram buildings deserves to be retold.

Seagram’s Distillery began operations in 1857 on approximately 11 acres of land around the corner of Caroline and Erb Street. The distillery started as a small subsidiary of a much larger flour milling operation called Granite Mills. Changes in ownership led to a series of name changes for the company, including, George Randall and Company, Seagram and Roos, Joseph Seagram Flour Mill and Distillery Company and Joseph E. Seagram and Sons, Limited and eventually Seagrams Ltd. By 1883, under ownership of Joseph E. Seagram, the company ceased its flour mill operations and focused entirely on whisky. The distillery had much success, importing internationally and becoming the largest producer of spirits in 1928. Following a decade of decline in the distilling industry, the distillery closed its doors in 1992. At its peak, it employed nearly 250 workers.

Built in the early 1900s, the two warehouses, which exist now as the Seagram Lofts, served an important purpose for the company. The structures could hold 5 to 7 thousand wooden barrels for ageing whisky, with a typical 40-gallon barrel weighing up to 550 pounds. The charred, white oak barrels influenced the flavour and colour of the product. As the barrels expanded during warm weather and contracted in the cold, the whisky would enter in and out of the oak pores, infusing the flavor of oak into the whisky. The windows on the warehouses, which are still a prominent feature of the buildings today, were necessary at the time for ventilation. During warmer weather, whisky vapours would concentrate on the upper floors, occasionally leaving workers intoxicated, to some extent, from the concentrations.

In the 1950s two larger warehouses were built, capable of storing 52 thousand barrels each. The newer buildings featured improved technology, such as electric hoists and elevators, and reduced intensive manual labour involved with collecting and sorting barrels. 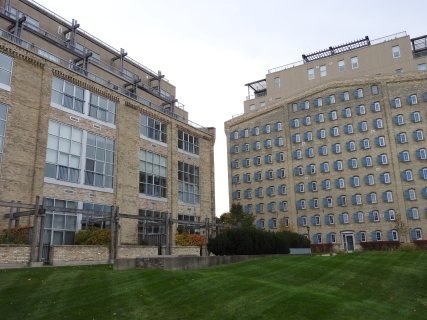 The Seagram Barrel Warehouses, now Seagram Lofts, after the 2001 redevelopment

Some of the last remnants of the Seagram Distillery are found in the two original warehouses, after a fire in 1993 destroyed all but a few buildings. In 1997, the City of Waterloo purchased the Seagram property. To encourage redevelopment the City put out a ‘request for proposals’ enticing developers to present ideas for the two buildings. Terra View Homes and Kiwi Newton were rewarded the contract and after two and a half years of construction, the lofts were completed in 2001.

The interior structural framework of the buildings is completely new. The original warehouses were structurally supported by timber racking. The original timber racking was demolished carefully and replaced with a new steel framework. Once the internal structure was complete, pre-assembled stairs and landings were put in place using cranes. This task required extensive coordination to maintain the structural integrity of the building and preserve the original brick end-walls.

Adding to the character of the lofts, original bricks and timber was salvaged from the demolition and incorporated into elements of the development. Reclaimed bricks, for example, were used to build new exterior walls, parking garages and for interior finishes. Similarly, reclaimed timber from the original racking was milled onsite and repurposed for doors, window casings, trim, stairs, railings, parking garages, etc. Amazingly, all bricks and timber on site are original – no new bricks or timber were purchased. The extensive repurposing of materials involved time sensitive, selective demolition, whereby timber or brick would have been carefully removed, de-nailed, sorted, safely stored and repurposed. Such re-use reduced demolition waste that otherwise would have gone to the landfill.

The Seagram Lofts have become a new part of Waterloo’s history. The buildings together have a total of 103 units and contain a mix of residential and live-work units. The buildings feature rooftop gardens and prominently 2-storey loft units with high ceiling great rooms. The site is located on 1.09 ha of land, and is in close proximity to uptown amenities, including Waterloo Park and Waterloo Square. The Seagram Lofts is a spectacular example of adaptive re-use with historic elements complimenting the new, creating a truly unique building.