In a quiet Westmount neighbourhood, nestled between the Westmount Golf Course and the Economical Insurance Office on Westmount Road South, lays the heritage home of Mary and RJ Stadus.

To the uninitiated, the house appears to lack the typical characteristics that one might expect from a home worthy of heritage recognition. This is no Victorian mansion – and try as you might, you’ll find no picturesque stained glass windows, curvilinear brackets or quaint wooden porches on this squat, 1950s building. Instead the house is significant for what it doesn’t have. Designated under the Ontario Heritage Act earlier this year, the house is a well-preserved example of the simplicity, clean lines and horizontal orientation characteristic of mid-century modern architecture. Unlike houses from earlier decades, mid-century modern homes were constructed with large glass windows to capitalize on natural light and natural views. Larger windows necessitated the use of post and beam construction to provide greater structural support, and this in turn permitted builders to open up interior floor plans. These characteristics are both evident in the Stadus house which features numerous, large rear windows and an open, airy interior. 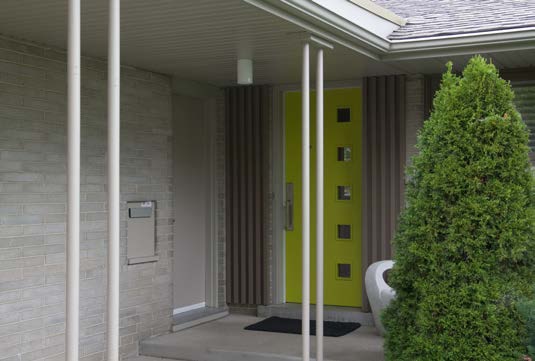 Entrance to the home

Although long forgotten by all but historians and the greatest of enthusiasts, mid-century modern architecture also reflected an evolving, post-war North American ethic which embraced science, technology and, above all, the possibility of the future. Modernist architecture abandoned the posturing and fussiness of earlier styles and in its simplicity was even considered an anti-style. With the use of industrial-produced materials and the absence of elaborate ornamentation, mid-century modern homes were both functional and affordable for families looking for a home in the suburbs. In fact, a floor plan for the Stadus home was featured in Better Homes and Gardens in 1955 and touted as the perfect home for a family of 7 children.

While appreciation for modern architecture in Canada has historically been limited to a few fans and architectural buffs, there seems to be is a growing movement to appreciate and recognize the form. Mid-century modern architecture has been embraced by such popular magazines as Dwell and Atomic Ranch (Atomic Ranch ran an article on the Stadus house in the summer of 2012). Local modern architecture blogs and walking tours have been popping up everywhere (for example, see pictures and descriptions for a midcentury modern walking tour in Hamilton: http://historicalhamilton.com/architectural-styles/mid-century-modern/). More recently, modern architecture was the theme of this year’s Region of Waterloo Doors Open. The protection of this Westmount home under the Ontario Heritage Act is a significant step for both Waterloo and the Region as a whole in their recognition of the rapidly disappearing architecture of the 1950s era.