by Waterloo Heritage on December 1, 2014

My 11 year old niece visiting from Sudbury once remarked as we walked toward Elizabeth Ziegler Public School that she couldn’t believe her cousins went to school in a castle. The fact that Elizabeth Ziegler Public School, located at the junction of Moore Avenue and John Street, evokes the image of a castle is not by coincidence. The building was designed in a Late Gothic Revival architectural style by Hamilton architect Frederick W. Warren, and features a number of design elements to conjure a medieval appearance, including the ample use of stone, two brick and stone turrets and a pointed arch front door. Buildings of the Late Gothic Revival style have also used leaded glass windows, tracery (decorative stone patterns that support the glass in a window), and even gargoyles to capture the essence of medieval England and France.

Late Gothic Revival was embraced by Canadian and American educational institutions in the first half of the 1900s and comprised the dominant style for university buildings at that time. Also known as “Collegiate Gothic”, the style was designed to capture the appearance of England’s Oxford and Cambridge University campuses – a look that was felt to convey a sense of tradition, learning and respectability. Mimicking their higher education counterparts, the Collegiate Gothic style was also applied to high schools, and to a lesser extent, elementary schools like Elizabeth Ziegler Public School. A number of local examples exist to provide for a good comparison with Elizabeth Ziegler, including Fergus High School (1927) and Guelph Collegiate Vocational Institute (1923), pictured below right. 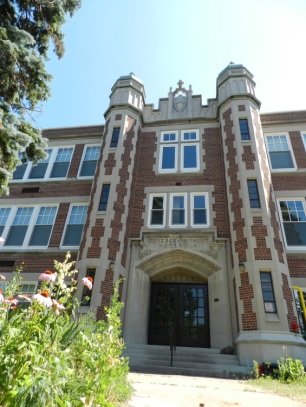 Elizabeth Ziegler Public School was Waterloo’s third school, built in the unlikely year of 1931, during the Great Depression. Construction, totaling $121,999, was assisted by a donation from Mrs. Winifred Tweed, chair of the board of education at the time. Mrs. Tweed was the wife of Sydney Charles Tweed, who served as an MPP for Waterloo and president and general manager of the Waterloo’s Ontario Equitable Life and Accident Insurance Company. Just a few blocks away from the School is Tweed Street, likely named after S. C Tweed. The original 1931 portion of the school housed 16 rooms, including a kindergarten room that now serves as the library. Although located only four blocks away from King Street, at the time of its construction the school was close to the edge of town.

Elizabeth Ziegler under construction in 1931. 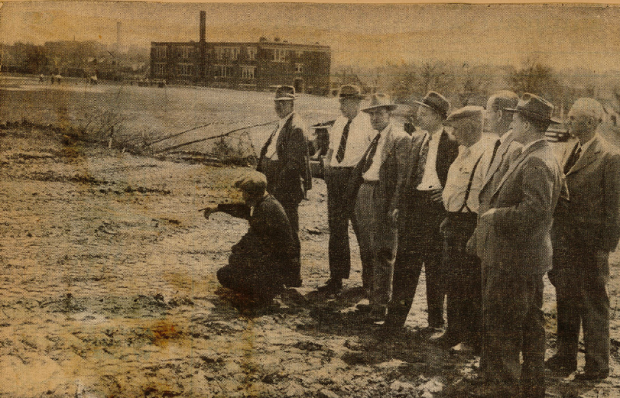 The school’s name pays homage to a locally celebrated and beloved teacher. “Lizzie” Ziegler was born in 1854, and served for 58 years as a teacher in the region. No fewer than 50 of these years were spent teaching at Central Public School where MacGregor Public School is now located. Ziegler was also Waterloo County’s first female principal, a title that she held at Alexander Public School.

Born during a revolutionary age for education in Ontario, Ziegler would have seen a significant transformation of Ontario’s early, fragmented school system. Much of this transformation is credited to the work of Egerton Ryerson, Upper Canada’s Chief Superintendent of Education, whose efforts led to a series of three School Acts adopted in the 1840s and ‘50s. The Acts enabled towns like Waterloo to levy taxes to fund schools rather relying entirely on tuition fees. With new public revenue sources, schools became accessible to all children, regardless of their family’s income. The new legislation also introduced standards for curriculum, teacher training and examination, and established school libraries.

Within this new universal and centralized education system, Lizzie Ziegler emerged to be the youngest student at the time to receive a teaching certificate from the Toronto Normal School (Ontario’s first Teacher’s College). She was 16 years of age. The certificate still hangs in the school and is signed by Ryerson. A photograph of Ziegler is also on display. In 1930, at the age of 74, Ziegler retired from her long teaching career. The year following, Elizabeth Ziegler Public School opened to great fanfare. Now, 83 years later, the school remains a thriving fixture of the historic Mary-Allen neighbourhood.